Qahiri is a Kufic typeface based on the modernized and regularized old manuscript Kufic calligraphy style of the late master of Arabic calligraphy Mohammad Abdul Qadir.

Following the convention of naming Kufic styles after the cities they appeared in, Qahiri (قاهري) is named after the city of Cairo, Egypt (القاهرة).

Qahiri is a free and open source project, any one is welcomed to use and modify it under the terms of the version 1.1 of SIL Open Font License.

The font provides many alternate shapes for many of its glyphs, which should be usable in any OpenType-savvy application. But since many apps have poor OpenType support, or bad UI, or don’t allow controlling features for single glyphs, Qahiri comes with a web application that provides easy access to glyph alternates.

Visit the app web page and type Arabic in the text area. Below the text will appear the alternates of the character before the text cursor (the gray bar). Clicking on an alternate form will cause it to be used instead of the current form:

The slider and the input box next to it control the text size.

There are two buttons that control the dots, the

button will remove all the dots, to get a dot-less version of the text resembling early Kufic manuscripts.

button, on the other hand, replaces the default rectangular dots with more familiar rounded dots.

The app allows exporting SVG file that can be further modified in any vector graphics application. Pressing

button, and can be loaded again any time in the app using the

button will delete all the text.

The application works also offline, and supports mobile browsers and small screens. It is also possible to add the application to the home screen for quick access without opining the browser.

On iOS devices, open the application web page in Safari, click on the download icon, then on Add to Home Screen and you will be prompted to add the application to your home screen: 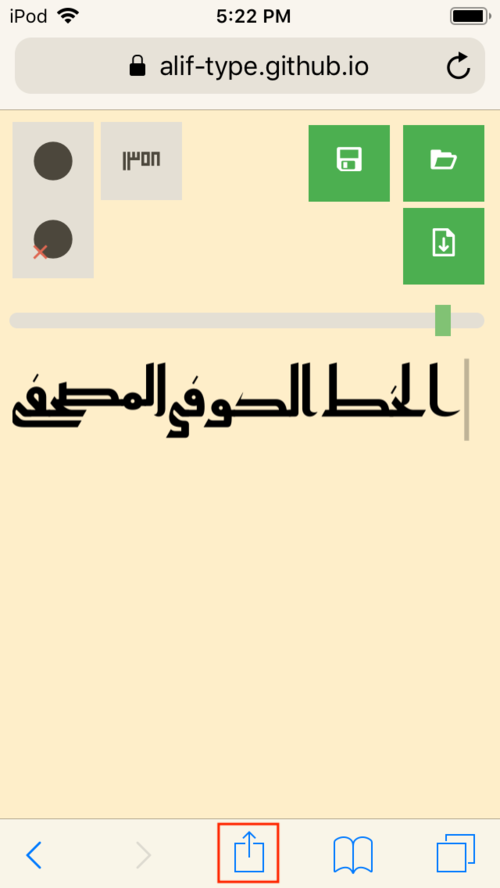 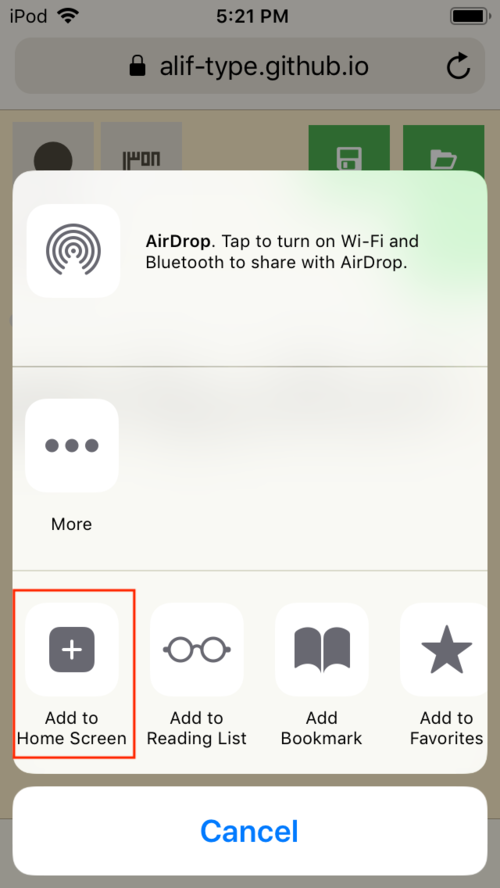 The font tries to remain faithful to the rules laid out by Mohammad Abdul Qadir, and one aspect of that is spacing. The space between letters, connected or not, as well as between words is always about half the thickness of vertical stems. There is distinction between inter-word and inter-letter spacing. Inserting more than one space character will increase the inter-word spacing.

The letter-forms used by default are designed to work together in harmony, but some of the alternate forms should be selected with care. For example, returning ya’ can clash with preceding letters with descenders and should be avoided in such cases. The font will try to solve clashes in such cases, but this does not always work.

The font is built using some advanced OpenType techniques that are not equally supported by software, and this might result in the font being broken in certain applications.

Performance of the application is also far from being optimal, so pasting large amounts of text should be avoided. Also it does not support multiple line, it works with one line at a time.